An iron arm, of Italian workmanship

I decided to write about some numbers about receiving rejections after I saw this tweet:

Writers don't share every rejection, only the acceptances, so I expect most of us probably have very skewed ideas about each other's levels of success.

I don’t have any problem showing how many rejections I get for the poems I’m submitting to journals, drawing on statistics I have available through Duotrope. When I tweet or post on Facebook about something of mine making it all the way to publication, it probably sounds as though I can just do anything and have an editor take it, just the way the tweet I quoted above says. I went through my submission records going back three years to produce some graphs to give you an idea of what things are like. Over this time I made 841 submissions (of course most pieces of writing were submitted multiple times) and had 117 of them accepted, either online or in print. All of the acceptances were first-time publications (nothing was reprinted).

Although I’d been submitting my work from long before this three year span, the last couple of years have been a lot more busy than previously. The first graph shows how the number of submissions has been growing from practically zero at the beginning to over forty a month. It has been a time when I was concentrating on my verse and mostly taking a break from prose. 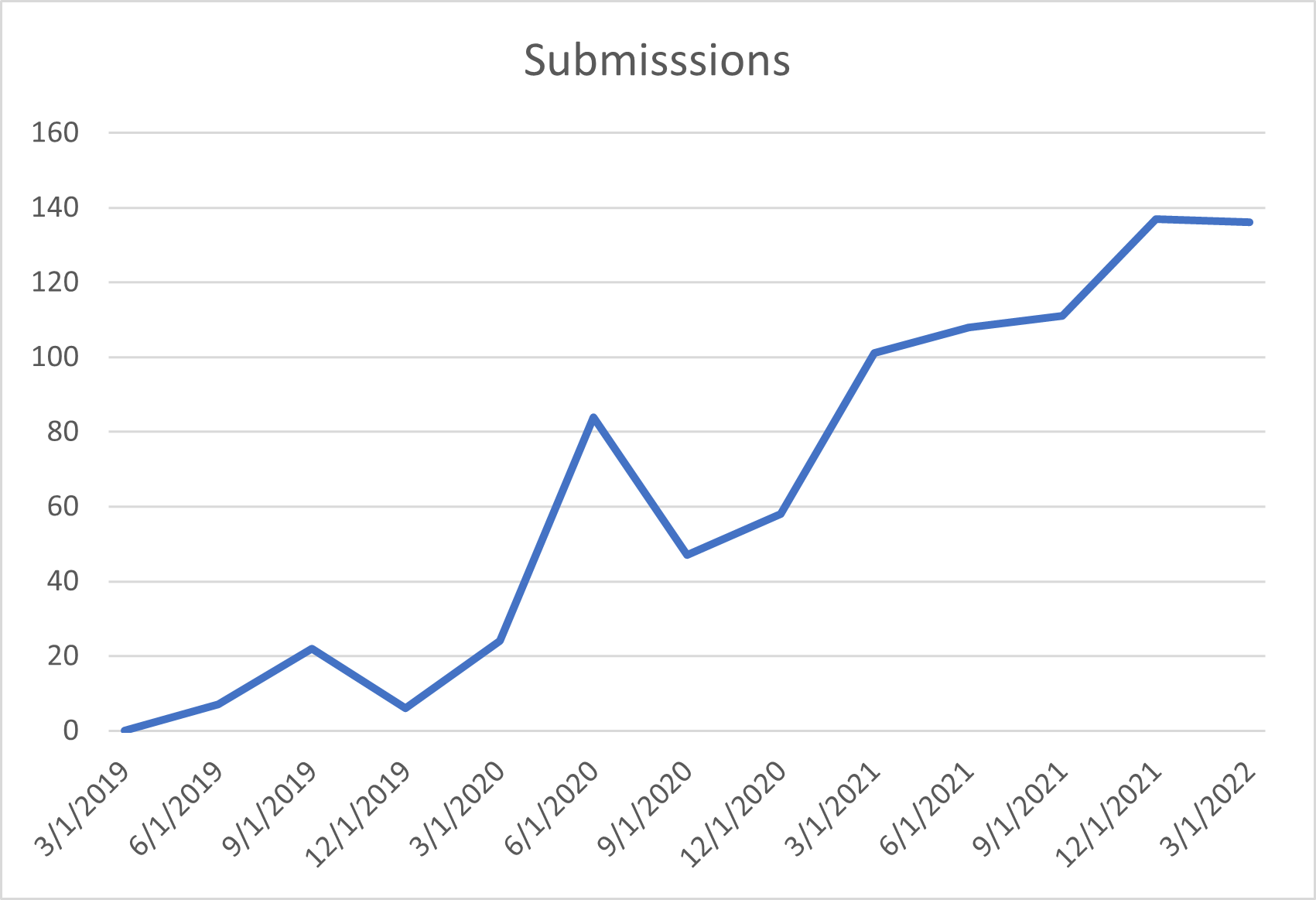 At the beginning, I was mainly sending out things which had been first drafts years ago, selected from the best of what I'd composed over a long stretch of time. There are still lots of these to send out now, but I have mixed in maybe a third or a half of the pieces new stuff I've written maybe only weeks or a month before I got them ready to submit. On the one hand these may be composed specifically to appeal to a call for submissions so as to have a better chance, but they haven't had a chance to improve through edits and rewrites the way the older pieces have had. The question is, how many are being accepted versus how many being rejected? 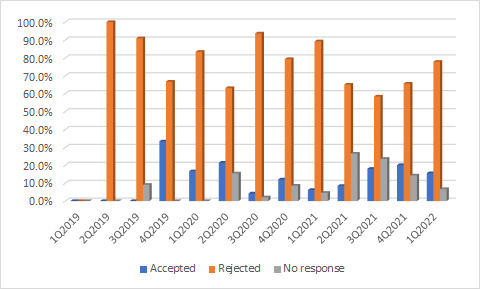 Whatever success I've had is on the scale of those little blue bars on this graph, which rarely get much over 15% of all submissions. The orange bars show how the outright rejection rate has never been less than 50%. The grey bars represent pieces where I never heard back from the journal editor, either because their policy was not to send out rejection letters, because my item was never properly received by them, mixed in with some which could still be under consideration.

Duotrope tells me that my overall acceptance rate, around 20% for the last twelve months, is higher than the average rate for other people submitting to the same places I’m targeting. Most of the places I submit work to are not paying markets, and the ones that have paid for a piece have all paid less than $20 US for the work. Last year the amount of cash my writing brought me was less than $100 US. Fortunately I don’t have to make a living this way.

I found a wide variation between different publications concerning how long you can expect to wait for an answer, which in some cases might be just a few days while others will take over a year. So those rejection numbers for the last few quarters can still go up as the grey bars shrink and the orange bars grow. In the first three months of this year, 77.8% of everything I sent out was rejected. Even when I was out repairing furniture, not attaining what I consider notable success, the negative response to what I was doing wasn’t that high. I don’t know what other writers find, but would not be surprised to find out that a lot of other active poets see something similar, and either push through it to get to those acceptances, or stop writing after a while. If you are a writer, does this seem like a lot? Is it something that you are prepared to accept, and what would you do to maintain a healthy image of what you are doing? I would really like to know, so if you could drop a comment in the Disqus box below, or contact me in another way, I’d like that very much.