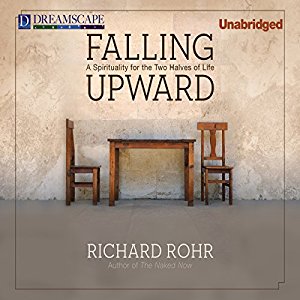 I have been attracted to religion from an early age, though I have lots of friends and acquaintances who have no interest in it or have an active dislike of it. Towards them I bear no ill will, though I understand that this blog post is probably not going to be their kind of thing.

For Lent I listened to the audiobook version of Richard Rohr’s book Falling Upward as my assignment and it was an experience of a contrary way of looking and doing things. Rohr is a Franciscan priest who has written many books on spirituality. This book is one which concentrates on the part of life where the things that we were taught for years as children and as new adults first getting established in the world, the things which have always been promoted as the underpinnings of society and the basis of a good life, no longer address the things which matter when a person reaches full maturity, the “second part of life.” After a certain point, the frenetic activities of establishing a career, making a home for oneself, living in a new family or in community or by oneself, can all start to feel less relevant. They call novels about young people concerned with fitting into the world Bildungsromans but as far as I know, there isn’t a term for a story about the similar kind of struggle at the other end of life (books like Philip Roth’s Everyman). I look at what my own life after work will be like, at what it is to stay on top of multiplying health concerns, and at the accumulation of stuff I own and this observation of Rohr’s resonates with me. Of course we’ve heard about this before, from many other thinkers, but Richard Rohr spotlighted the problem in a way that seemed to grow out of a solid basis in philosophy.

In our church the end of the Lenten season is marked by the Easter triduum, three days in a row where we volunteer church musicians spend a lot of time in services. First there’s Holy Thursday evening where we commemorate the Eucharist, then Good Friday which is usually a re-enactment of the story of the Passion of Christ, and on Saturday we have the Easter Vigil service which is the high point all centered on the Resurrection event. It turns out in my case, there was also the 8am Sunday Mass I usually go to during the year, which had a much larger number of people present than the Holy Week services. This is a lot to get through! Our group has been practicing for months now, going over every bar so that it is as good as we can make it. Our former choir director here liked to remind us that we are offering it up, and anything less than the best we are capable of would in fact indicate something lacking in our spiritual devotion. In the end, live music is the most ephemeral of fine arts. It’s so easy to begin to wonder what all the hours of effort amounted to, whether the sum total was an imaginary goal that maybe no one will remember for long. Now I think if we can view this as an honest spiritual expression which has its roots in where our lives are at this moment, and a work that went out into the world and we hope made an impression in the hearts of those we performed for, then that can be enough. I like to feel that this is something that the author of this book would be able to approve of also.